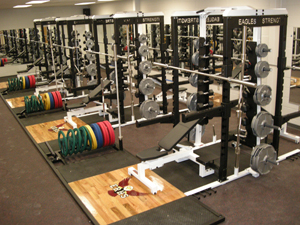 Excellent article by Greg Rosenstein, USA Today, as it relates to high school weight room safety and strength coach certification. Given the significant shift to Olympic lifting in high school facilities over the past fifteen years, the attention to safety and certification is required more than ever.
When Boyd Epley walks into a high school to examine its strength and conditioning program, he says he often comes across a far too familiar scene where a teacher is propped back in his chair reading a newspaper while students lift weights on their own. For Epley, director of coaching performance for the National Strength and Conditioning Association (NSCA), those instances reinforce what his organization says is a major problem.

“It’s absolutely ridiculous what is going on,” he said. “When you put a coach or physical educator in the mix, and they don’t have the proper background and is not certified, it could get out of hand and the athlete is at risk. The certification is a big deal for us. A lot of coaches in school systems don’t recognize the need.” While a lack of proper educators and programs plagues many schools, others are on track. Nine recently were named received 2011 NSCA Strength of America award winners. Mike Nitka, the strength and conditioning teacher at back-to-back winner Muskego High School in Muskego, Wis., said the award represents years of hard work. “I really had to sell to the administration that this is good for our kids,” Nitka said. “They are starting to compete with fewer injuries so we can keep them on the court and field.” Nitka said the improvements in the weight room have translated to on-field success. After hiring certified instructors and implementing the NSCA’s training regimen, the school won the All-Conference Sport Trophy two out of the past four years.
According to the NSCA, a coach can become certified by earning at least two approved continuing education units in the past two years and conducting a yearly educational program for all physical education and coaching staff. A program can qualify for national recognition by posting emergency plans, conducting daily inspections, having a certified instructor present for all workouts and requiring students to participate in strength and conditioning classes.
Epley believes the problem in high school strength and conditioning programs stems directly from the instructor. He said many do not have the NSCA certification to properly teach high school students and, as a result, their poorly planned programs are putting athletes at risk. “You don’t open the door to a swimming pool unless a lifeguard on duty is certified and knew how to handle life-threatening situations,” Epley said. “The same is true with the weight room. “You should never open the door to a weight room unless you have personnel on hand that can handle all of the situations. It could become dangerous.”
Last August, following a preseason football workout, several McMinnville (Ore.) High players were sent to the hospital after they developed triceps compartment syndrome, which can impede blood flow, and rhabdomyolysis, a muscle injury that can lead to kidney failure. Oregon health officials cited the workout and its conditions as contributing factors.
Jay Hoffman, President of the NSCA, said many of class instructors tend to be coaches that are not competent enough in terms of training knowledge who often put students through programs too advanced for their age group. “Young individuals should not be doing the same program that the local professional team or college team is doing,” Hoffman said. “The instructor needs to be able to make adjustments for that particular athlete and their level of maturity.” Hoffman and Epley both say the Strength of America Award can help generate motivation for schools to change their poor habits and limit situations such as what happened at McMinnville from happening.
“Strength and conditioning is a lifetime sport,” Hoffman said. “With the issues that we have with obesity, if we can start at an earlier age to get people to be smarter in terms of exercise and nutrition, we have a chance to be a healthier country.”